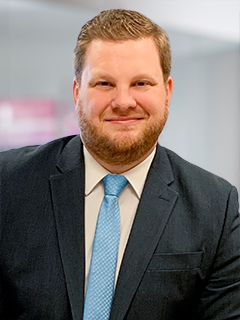 Nick Grether is an attorney in the Employment Law Department.

His practice also includes taking preventive measures in advising employers on creating and maintaining lawful policies, working with employers to implement useful procedures, and counseling on best practices when faced with a dispute. Nick also works with clients to update their policies to stay current with the ever-changing world of employment law.

Prior to joining the Maloney Firm, Nick worked for law firms representing private and public entities specializing in employment matters. Before joining private practice, he worked for the Office of the Governor of California, advising on parole decisions and the legality of appointments to numerous state boards.

He graduated from the University of the Pacific, McGeorge School of Law, with distinction in 2009 and during law school, he interned for several California state agencies. Nick earned his Bachelor of Arts in Business Administration from Washington State University.

In his spare time, he enjoys playing golf and snowboarding. He hopes one day to see the Mariners play in the World Series.