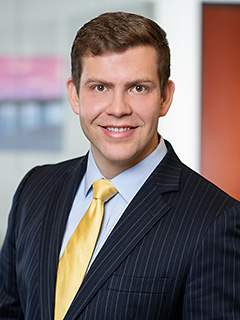 Sam Fogas is an attorney in the Litigation Department.

Sam graduated cum laude from the Sandra Day O’Connor College of Law at Arizona State University. During law school, Sam served as an Articles Editor for Jurimetrics, The Journal of Law, Science, and Technology. Sam worked as a Consumer Protection Division Legal Extern in the Arizona Attorney General’s Office, as an extern to the Honorable Paul McMurdie in the Arizona Court of Appeals, and as a law clerk to the Honorable Mark Moran in the Superior Court of Arizona, Cononino County. Additionally, Sam interned with CBS Television Studios in the legal department doing both above-the-line and below-the-line agreements for various CBS television shows including Star Trek, NCIS, The Neighborhood, Seal Team, and others.

Sam received his Bachelor’s degree in Economics from the University in Minnesota in Minneapolis, Minnesota. In his free time, Sam enjoys surfing, running, and gardening.